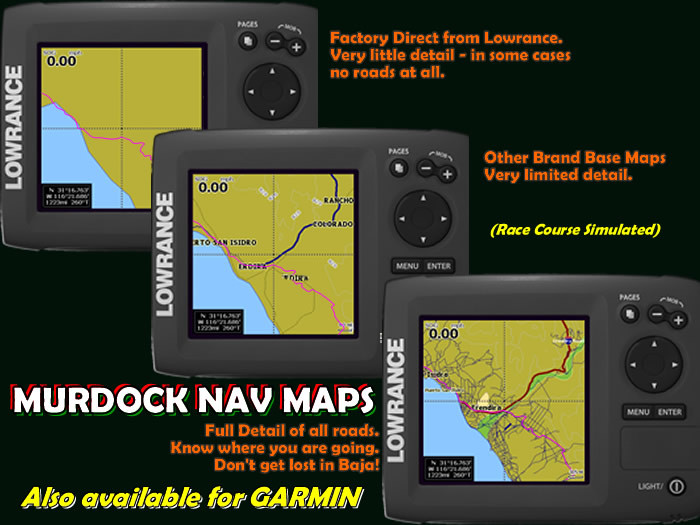 Don't get lost in Baja!

You are purchasing multiple files
that will be downloaded in a compressed ZIP file.
After the download, simply uncompress
the ZIP file using your favorite decompression program like WinZip,
and load onto an SD card (chip) that you provide. This will work on full sized SD cards as well as micro SD cards.

Primary Features of the chip...

The information on these chips is based on the combined efforts and experiences of family and friends, as well as information gathered from multiple race teams. Our Baja map chip is the result of hundreds of cumulative years of racing, chasing, exploring, and extensive general research of maps, almanacs, and on online resources.


CHASE ROADS
Yes, we have driven on a majority of the roads in the files. All major highways are included in the files. We have been on all of them. In the beginning, the "chase roads" were added based upon all roads that "intersected" a race course. As more and more of our secondary trips were recorded, we decided to add more roads to the file. The addition of these roads has led to an incredibly detailed map south of the border.
Please note that locked gates are not marked in the file. You may encounter a locked gate, making the road impassible. If you do encounter a gate that is not locked, please be sure to close the gate behind you.

STREET NAMES
The street names were added based of what we could find on paper maps and in almanacs, as well as online resources. They are as close as we could get them.

RANCHO NAMES
As we would pre-run, the ranchos we would pass along the racecourse would get marked. Eventually we had a whole bunch of ranchos, some with names, and some without. Consulting our almanacs, we came up with the missing names, so we added them to the files. Some of the maps contradict each other when it comes to a name.

MILITARY CHECKPOINTS
The marked military checkpoints in the file might be hit and miss. Some of the checkpoints are a permanent fixture and are there all the time, and some are of the roving variety. You may encounter a checkpoint that is not in the file. If so, please let us know and we would be happy to add it to future releases.

BACK ROADS
These would be the roads that are not really "race" related. These are taken from our non-race excursions, and come from a plethora of friends and family have driven down a dirt road just to see where it goes.

PEMEX STATIONS
These were only recently added to the files. This is by no means an exhausted list of gas stations. These are just the ones that we are aware of. Every trip more new ones get added. Baja is adding more and more every time we go down there. If you have a favorite station that is not in the file, drop us a line and let us know where it is.